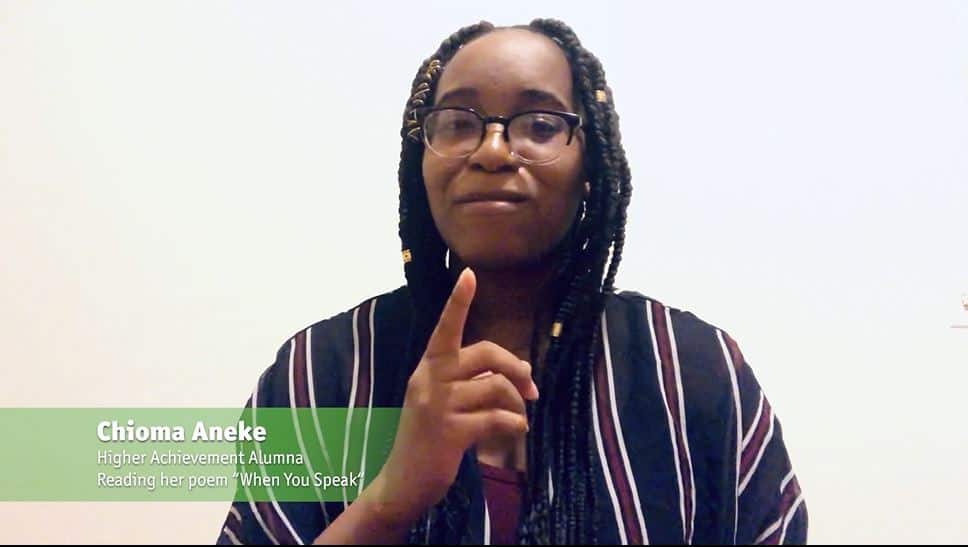 When Chioma Aneke first learned of Higher Achievement in the 4th grade, she was skeptical. “A program that lasted throughout the entire year—including summer—and continued for four consecutive years?” she recalls thinking. “But my science teacher at the time urged me to apply, telling me he was writing me a recommendation on the spot. These words coming from an adult meant a lot to me, and it prompted me to take a step back and really look at what the program had to offer.”

Chioma’s school’s curriculum was not academically rigorous enough to challenge her, and she was a shy and sensitive student lacking in self-confidence.

“I immediately noticed a huge difference academically and socially upon joining Higher Achievement and becoming a scholar,” remarks Chioma. Higher Achievement challenged Chioma and gave her the opportunity to learn material a grade above what she was learning in school. As a scholar, her grades improved tremendously and she maintained straight A’s.

On top of Chioma’s academic success, she blossomed from a shy caterpillar to a social butterfly. “I was not afraid to raise my hand in class and inquire and ask questions. I was surrounded by peers my age who wanted to be as academically curious as I was.”

In addition to academic enrichment, Chioma was also exposed to a variety of electives. “It was there that I found my passion for writing poetry, which eventually evolved into spoken word poetry,” says Chioma. “I used it as an outlet and a coping skill throughout my middle school years.” Her passion led her to perform her spoken word poetry at places from the Shakespeare Theater and the Kennedy Center all the way up to the steps of the US Capitol.

When it was time to apply to high schools in 8th grade, Chioma and her parents—first-generation Nigerian immigrants—were unfamiliar with schools in the area. Higher Achievement stood beside Chioma as she selected a school where she would fit in and be challenged to excel.

Chioma was accepted to the School Without Walls Senior High School’s dual enrollment program with the neighboring George Washington University. This partnership allows 11th and 12th-grade students to take classes at GW, and to earn both a high school diploma and an Associate’s Degree from the university. Chioma thrived in the program and graduated ahead of the curve.

“Once a scholar always a scholar,” affirms Chioma. “I was fortunate enough to maintain the support of my Higher Achievement mentors well after graduating from 8th grade. They never took their foot off the gas, helping me with applications, finding scholarships, and even with basic communication skills such as the importance of eye contact and a firm handshake.”

After high school, Chioma decided to continue with her bachelor’s degree, graduating with a degree in psychology from George Washington University at the age of 19 years old. “This feat could not have been possible without the support of my Higher Achievement family, who I can honestly say are my second family.”

Chioma currently works at the Children’s National Hospital as a child psychiatric specialist, where she helps serve and treat disadvantaged youth with mental and behavioral disabilities and disorders. She is currently applying to medical schools to pursue her lifelong goal of becoming a primary care physician.