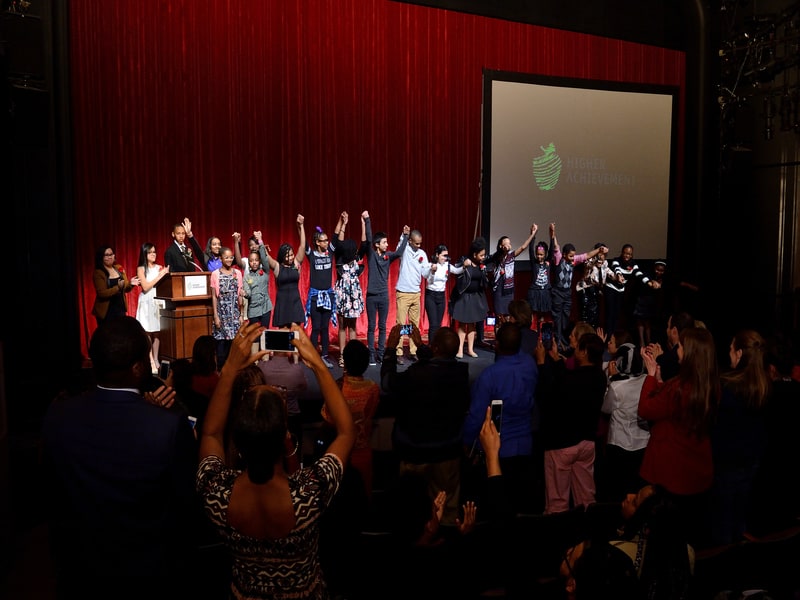 Baltimore’s Love Out Loud performance was a hat trick.  The event, held March 7, was the culmination of tons of hard work by Higher Achievement scholars, mentors, and staff; an opportunity to recognize donors and champions with Golden Apple Awards; and a celebration of 10 years of serving scholars in Baltimore through the Higher Achievement program.  What an incredible night!

Held at the University of Baltimore’s Lucy and Vernon Wright Theater, the event was attended by scholars and their families, long-time supports and new friends, mentors and Higher Achievement alumni, and many notable guests, including Calvin G. Butler, Jr, the Chief Executive Officer of Baltimore Gas and Electric, and DeRay Mckesson, a civil rights activist, author, and former Higher Achievement Center Director.  The poems performed by scholars were touching, thought-provoking, and inspiring.  Golden Apple Awards were given to Higher Achievement Baltimore’s courageous leaders and supporters, many of whom have been champions since early on.

But, it has not always been easy and there is farther to go.  “Each day, Baltimore students fight an uphill battle against the inequities of public school funding, a widening achievement gap, low societal expectations, and the ever-present threats to their well-being . . . We told them to dream crazy! Because they shouldn’t limit their dreams based on their zip code.  And, because, if they can dream it, we can help them achieve it.  That’s our purpose, that’s our work, and this is our journey!”

Remarks from Aaron White, a graduate of the first class of Baltimore scholars and now a student at McDaniel College, provided a personal perspective on the lasting value of Higher Achievement.  “Higher Achievement helped an insecure young man grow into an ambitious leader who graduated number two in his high school class and received the opportunity to pursue higher education with a full tuition scholarship.”

His advice to Higher Achievement scholars?  “Continue to dream, plan, and trust your process, never comparing yourself to others, but believing in your own ability to achieve greatness,” he said.